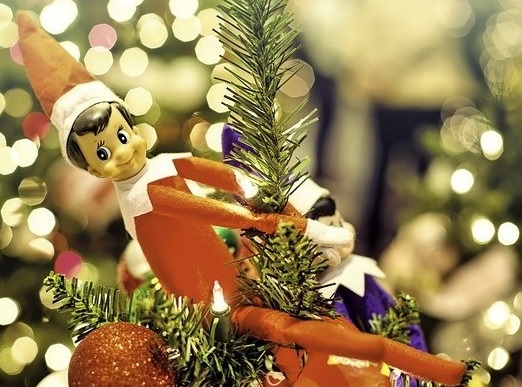 Back in 2014, one of our Consultative Insurance Group team members, Susan Jones, purchased an Elf on a Shelf for her kids.

The Elf "Fuzzy Wuzzy" (named by her children), each night would fly back to Santa to report the behaviors of her kids, then return in the morning, appearing in a different place in the home.

We thought it would be great fun to resurrect Fuzzy Wuzzy for this holiday season, particularly since 2020 had been quite the year.  Maurica decided to create a spin on the mishap and came up with this letter.  Since today is Christmas Eve, we thought it would be appropriate to share.

This tale is told entirely from Fuzzy Wuzzy's viewpoint as he shares with Santa an unexpected mishap in The Joneses home upon returning from the North Pole.

A huge thank you to Susan Jones for locating this tale!

We hope you enjoy and have a Happy Holiday!

Thank you again for entrusting me as a Scout Elf this year.

My apologies for the delay in my report on Jocelyn and Payton. Things have been, well, a little "challenging" since the accident.

You see, Santa, I’d been kind of slack, just doing an “okay” job of being an “elf on a shelf.”  Basically, I’ve been doing enough to get by: watching, listening, and gathering key details of Christmas wishes.  Bringing my report to you each night, returning home and finding a new perch on a shelf.

Santa, I have to tell you, one of my favorite things to do after I report in, is to hang out with the other Scouts.  Oh the stories they tell!

We’d gather around a cozy fireplace, drink a little eggnog, a little hot cocoa and listen to their stories.  Oh the laughter that ensued after the sharing of delightful tales of mischief:

Tuesday morning, upon my return, I decided I would have something to share with my brethren Scout Elves by evening.

It all started, when I spotted my hostages upon my arrival to my perch:  a stuffed monkey and a decoy Santa with a decoy sleigh were atop the dining room table as a centerpiece/decoration.  I knew my opportunity had arrived.

How perfect is this?!? I had learned from Jingle, Scout Elf #2670820456, that toilet paper was an effective tool, and not just for toilet papering a tree.  Toilet paper is lightweight and easy to wrap things,… like a decoy Santa and a stuffed monkey!

The house was dark in the early morning hours.  No one was awake to hear the protests…see the struggles.  It was challenging for me, Fuzzy Wuzzy, lone elf hunter, to capture, bind, and climb to safety in the chandelier with the end of the toilet paper and wait.

It went so smoothly! I couldn’t believe how easy this was! Why in the world had I not been doing all this before? This was some serious fun…and I couldn’t wait till nightfall to return to the North Pole to share with the others.  Oh how they would laugh!

Around 6:30am, Jocelyn, entered the dining room, and flipped on the light switch.

WOW that light was BRIGHT! But I didn’t flinch a muscle.

I waited for her surprise to see me, no longer just sitting on a shelf smiling, but perched in the chandelier with hostages!  She giggled and gazed in amazement.  SUCCESS!

Her mother called her to breakfast, and she left.  I waited for Payton to arrive.

He will be so impressed with my newly found skills! I watched the clock over the mantel…should be just any time now….  Sure is getting warm.  I wonder if they 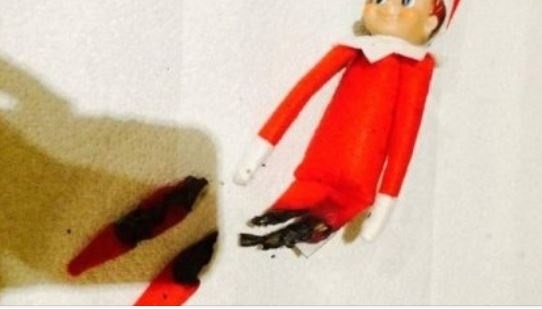 WHERE IS THE FIRE DEPARTMENT??!?!

Santa, I must have passed out from the pain.  When I came to, I was in the infirmary and apparently had undergone surgery to re-attach my charred legs.

The stuffed monkey and decoy Santa had forgiven me, and stopped by to visit and share what happened after I blacked out.

They said the mother rushed in and realized my red pantsuit was smoldering from the heat radiating off the old chandelier light bulbs, causing a burning smell to drift throughout the house.

Mother arrived too late to rescue all of me from the chandelier (before half my legs fell off), but was kind enough in removing my upper half down and gathered up my charred calves and feet from the table.

Bless her, as she took it upon herself to perform surgery and reattach my legs as best she could.

I will forever be indebted to her for this kind act.  Due to her expertise stitches, I had a complete recovery after a day in the infirmary! Miracles never cease to amaze me.

Santa, I am back to my regimen--a shorter, but wiser Scout Elf.  Since this ordeal, I have learned 4 valuable lessons:

2) If you think something may be flammable, it probably is and should be kept away from flames, or old light bulbs.

3) Never underestimate the power of a mother.

4) Peer pressure is for the birds! Just because everyone else is doing it, doesn’t mean I should have to.

Thank you Santa for allowing me to continue my holiday mission reporting to you on these kids.

Looking forward to seeing you this evening! 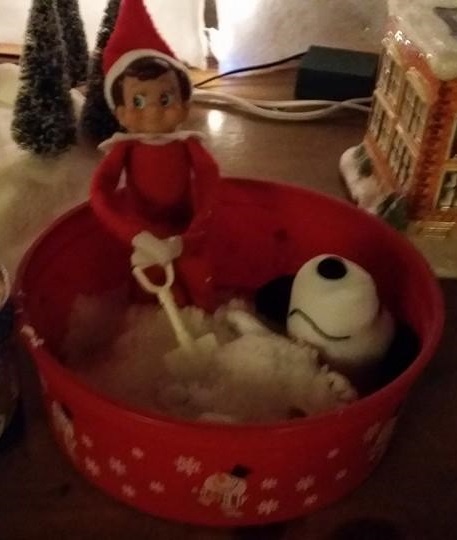